Jim’s practice focuses on corporate, business and tax planning. He helps his clients understand the tax considerations of how to structure and operate their organizations and transactions. Jim also helps many clients create wealth and legacy preservation plans. Along with his business acumen, Jim is also one of the foremost aviation experts in the region, having handled thousands of aircraft transactions. Jim is an ATP rated pilot, and has flown many of the aircraft he deals with.  His aviation experience gives Jim a unique perspective in advising aircraft owners and operators from coast to coast on all aspects of aviation law.  As an experienced advisor, Jim knows that the most important part of his practice is the trusted relationship he builds with his clients. Over the course of his counsel, his clients enjoy the benefits of his sophisticated, prompt and effective problem-solving ability built from an intimate understanding of the client’s specific needs.

Success Story:
Jim worked on an estate plan for owners of a private company. The client wanted to maintain the company and pass it down to his children and grandchildren. Jim and his team established a long-term estate and business succession plan that, through various estate freeze techniques, sales to grantor trusts, grantor retained annuity trusts, and life insurance planning, passed more than $300 million from the patriarch to matriarch, and then from matriarch to children, without estate taxes. He also used post-death planning in the matriarch’s estate to pass a significant amount of the business and other assets to grandchildren exempt from generation-skipping taxes.

Over more than 30 years of representing the original owners, Jim became involved with the businesses, including tax and corporate consulting, structuring and implementing many significant transactions for their companies, acquiring other companies, purchasing and selling aircraft, structuring intercompany transactions to minimize tax, and disposing of lines of business that no longer fit their business model. During that time, he grew to know the dynamics of both the extended family and the business, and is now helping plan the children’s estates and business succession following the death of the original owners. 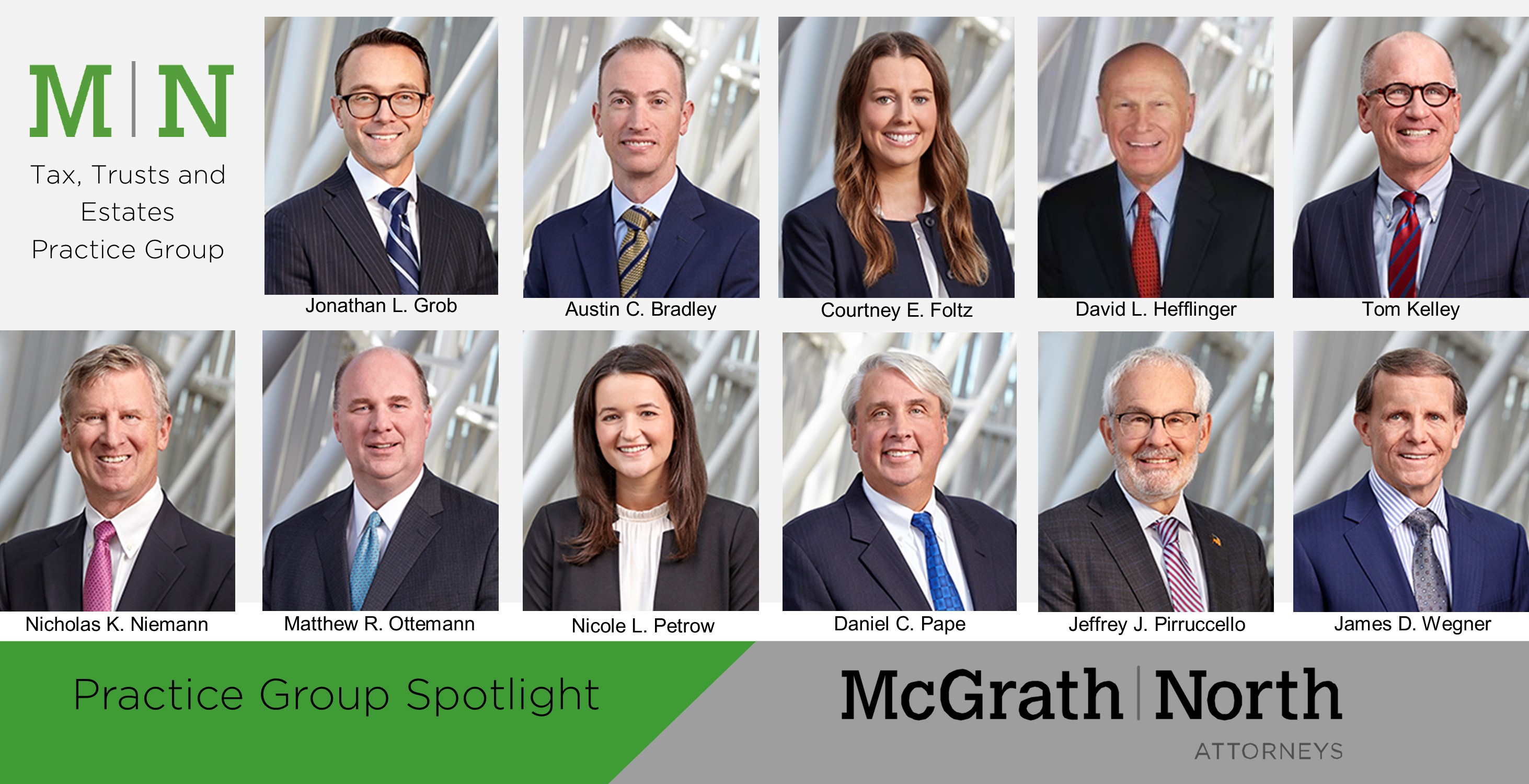 In its newly released 2023 edition, The Best Lawyers in America® has recognized 44 McGrath North attorneys in the full range of specialty practice areas key to supporting businesses of all sizes across a broad range of industries, and 28 attorneys have been recognized for 10 years or more.  Of these attorneys recognized based on peer-review surveys, seven were named “Lawyer of the Year.” This honor is awarded to only one attorney with the highest overall peer-feedback for a specific practice area and geographic location.

McGrath North is pleased to announce that their Tax, Trusts and Estates practice group earned a top ranking (Band 1) in the 2018 Chambers High Net Worth (HNW) guide. McGrath North is one of two Nebraska firms to receive the Band 1 honor for private wealth law.

Buying Or Selling An Aircraft? Begin Your Planning Well Before You Land The Deal

We received a frantic call from an aircraft buyer who had recently taken delivery of a beautiful plane. The buyer had been careful to follow the Internet “advice” he found that suggested he could avoid paying sales tax by taking delivery of his aircraft in a state that had no sales tax. The plane was then brought into the buyer’s home state, from which the plane was operated. A while later, the buyer received a letter from his home state’s taxing authority asking where the aircraft was hangared, and whether sales or use tax was paid to the owner’s home state. Unfortunately, the new owner was now on the defensive, calling us to attempt to mitigate the sales or use tax that may have been reduced or avoided had careful planning occurred before the purchase. The scenario is common and highlights the importance of tax planning well before an aircraft is purchased. Below are a number of tax considerations in planning for the purchase of your next aircraft (note that similar issues may apply to many other types of business assets).

Jim’s aviation experience gives him a unique perspective in advising aircraft owners and operators on all aspects of aviation law.