Multijurisdictional Practice Under Rule 5.5: Ambiguity With A Little Guidance ?

“Neurosis is the inability to tolerate ambiguity.”  Sigmund Freud

Not long ago, in order for a lawyer to work on a matter in a state where the lawyer was not licensed, the lawyer would have to become licensed in that state or associate with local counsel.  Now law firms and corporate legal departments are expanding their practice into states in which their lawyers are not licensed as a result of the almost universal adoption by the states of the Rules of Professional Conduct.  Other factors that have contributed to the increase in multijurisdictional practices are:  (1) the ease of access to the law of other jurisdictions and the enhanced ability to communicate with out of state clients and counsel via the internet; and (2) the increasing numbers of attorneys working as in-house counsel.  Iowa Rule 32:5.5 (“Rule 5.5”) relating to multijurisdictional practice, or similar versions of the Rule have been adopted in most states.  While providing a great deal of freedom and flexibility to outside counsel and in-house counsel, Rule 5.5 leaves substantial room for interpretation of what constitutes authorized multijurisdictional practice.

This article addresses the ambiguities and some of the idiosyncrasies of Rule 5.5 and in the process it will identify some of the guidelines that will assist a lawyer in determining if particular multijurisdictional activity is authorized under Rule 5.5.

Rule 5.5 applies to both corporate legal departments and private law firms.  The term “firm” or “law firm” denotes a lawyer or lawyers in a law partnership, professional corporation, sole proprietorship and includes the legal department of a corporation or other organization.  Rule 32:1.0(c).

As will be discussed below, these concepts require a lawyer to consider all of the circumstances relating to his or her multijurisdictional practice in order to determine if such practice is indeed authorized.

In analyzing Rule 5.5, it becomes apparent that some of the standards that govern multijurisdictional practice lack objective clarity.  For example, the Comments use the term “temporary” which, as defined, is an oxymoron.  Services may be “temporary” even though recurring, or for an extended period of time, e.g., representation of a client in a single lengthy negotiation or litigation.  Rule 5.5, Comment 6.  There is no temporal litmus test in terms of what is considered to be practice on a temporary basis.  This then begs the question:  If services are temporary over an extended period of time, when do such temporary services rise to the level necessary to create a “systematic and continuous” presence?  The answer to that question must be discerned from an overall reading of Rule 5.5 and the Comments.  The answer will depend on the lawyer’s particular circumstances.

The Comments also introduce the metaphysical concept of “presence”.  A lawyer’s presence in a state may be deemed to be “systematic and continuous” even though the lawyer is not physically present in the jurisdiction.  Rule 5.5, Comment 4.  Stated differently, “As a lawyer you might be ‘there’ even if you are not really there.”  In today’s digital world this could mean a virtual presence through the use of a website depending on the amount of contact with a particular jurisdiction, or perhaps an advertising campaign targeting another jurisdiction through the use of its local media.  The volume of activity by a lawyer in a jurisdiction in which he or she is not licensed may result in a finding that the lawyer was indeed “present.”  If the lawyer is found to be present, that lawyer is subject to the discipline of the state in which the services are being provided. See Iowa Supreme Court Attorney Disciplinary Board v. Carpenter, No. 09-1343 (2010) (Minnesota lawyer not licensed to practice in Iowa practicing immigration law in federal court in Iowa under Rule 5.5(d)(2), was subject to the jurisdiction of the Iowa Supreme Court).

The lawyer’s client may have been previously represented by the lawyer, or may be resident in or have substantial contacts with the jurisdiction in which the lawyer is admitted.  The matter, although involving other jurisdictions, may have a significant connection with that jurisdiction.  In other cases, significant aspects of the lawyer’s work might be conducted in that jurisdiction or a significant aspect of the matter may involve the law of that jurisdiction.  The necessary relationship might arise when the client’s activities or the legal issues involve multiple jurisdictions, such as when the officers of a multinational corporation survey potential business sites and seek the services of their lawyer in assessing the relative merits of each.  In addition, the services may draw on the lawyer’s recognized expertise developed through the regular practice of law on behalf of clients in matters involving a particular body of federal, nationally uniform, foreign, or international law.

Aside from the examples of assisting a client in a search for a potential business site or having a highly specialized practice, the Comment offers little real guidance.  Unfortunately, the drafters’ use of ambiguous verbs such as “involve” and “involving” to describe the nature of the services that “may” constitute a reasonable relationship shed little light on what conduct is actually authorized.  In preparing  Comment 14 that addresses this aspect of multijurisdictional activity, it’s as if the drafters took the position “You’re a lawyer, you figure it out.”

While it might have been preferable for the drafters to have provided more specific examples of multijurisdictional conduct conforming to the Rules, we should be cognizant that the Comments are merely intended as guides to the interpretations of the Rule.  Preamble par. 21.  Moreover, the fact that specific conduct is not identified does not imply that the conduct is or is not authorized.  Rule 5.5, Comment 5.

Fortunately, the American Law Institute, in the Restatement of the Law Governing Lawyers (2000), has attempted to eliminate some of this ambiguity by providing specific examples of what conduct would be considered “reasonably related” to the lawyer’s practice in a jurisdiction in which he is admitted.  A lawyer providing legal services in the state in which the lawyer is not licensed may advise a client on numerous issues including, but not limited to:

The Restatement provides specific illustrations of the rule.  One such helpful example is set out below:

Lawyer is admitted to practice and has an office in Illinois, where Lawyer practices in the area of trusts and estates, an area involving, among other things, both the law of wills, property, taxation, and trusts of a particular state and federal income, estate, and gift tax law.  Client A, whom Lawyer has represented in estate-planning matters, has recently moved to Florida and calls Lawyer from there with a request that leads to Lawyer’s preparation of a codicil to A’s will, which Lawyer takes to Florida to obtain the necessary signatures.  While there, A introduces Lawyer to B, a friend of A, who, after learning of A’s estate-planning arrangements from A, wishes Lawyer to prepare a similar estate arrangement for B.  Lawyer prepares the necessary documents and conducts legal research in Lawyer’s office in Illinois, frequently conferring by telephone and letter with B in Florida.  Lawyer then takes the documents to Florida for execution by B and necessary witnesses.  Lawyer’s activities in Florida on behalf of both A and B are permissible. ld at p. 30.

5. The Duty of Competence.

Iowa Rule 32:1.1 provides that when a lawyer represents a client, the lawyer must do so competently.  At a minimum this requires the lawyer to become familiar with the substantive and procedural aspects of the law of the state in which the lawyer seeks to practice as it relates to the matter being handled by the lawyer.

It is difficult enough maintain competency with the law of the state(s) in which a lawyer is licensed much less those states in which a lawyer seeks to engage in multijurisdictional practice.  While Rule 5.5 provides a means by which jurisdictional boundaries may be crossed by lawyers, the risk is that the lawyer will not be adequately familiar with the law of the other state and will unintentionally deviate from the standard of practice in that jurisdiction.  Accordingly, the access provided by Rule 5.5 to other jurisdictions should be used judiciously.  Lawyers should not hesitate to associate with local counsel in order to avoid the traps and pitfalls that await a lawyer in a new and unfamiliar jurisdiction.  For a case study in what can go wrong when a lawyer seeks to engage in multijurisdictional practice without adequate familiarity with the law of other jurisdictions, see State ex rel. Counsel for Discipline v. Orr, 277 Neb. 102, 759 N.W.2d 702 (2009).

Even with its ambiguities, Rule 5.5 provides opportunities for lawyers to practice in jurisdictions other than those in which they are licensed.  However, the rule is drafted in such a manner that a lawyer must consider a number of factors in order to determine whether practice in another jurisdiction is authorized — especially in transactional matters.  Good practice dictates that a lawyer become familiar with the law of any jurisdiction in which the lawyer is providing services. Finally, keep in mind that the jurisdiction in which the service is provided retains the power to regulate activity by lawyers regardless of where the lawyer is licensed or located.

J. Scott Paul received his Bachelor of Business Administration Degree from the University of Iowa in 1978 and his Juris Doctor Degree from Creighton University School of Law in 1981.  He is licensed to practice in Nebraska and Iowa.  Mr. Paul has been a shareholder at McGrath North in Omaha, Nebraska since 1988.  He has a “multijurisdictional” insurance coverage litigation practice.  Specialty areas of his practice include professional responsibility, medical malpractice defense and representation of airport owners. 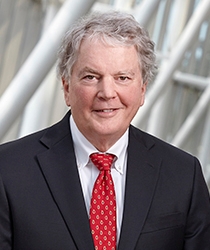